A dedicated, open mind allows Branford Marsalis to have the world of music at his fingertips

Branford Marsalis is a musical polyglot. He is fluent in every language and genre, from classical to jazz, R&B and hip-hop, and his saxophone gives voice to something beyond words, defiant of traditional boundaries.

He will perform at the Missouri Theatre Feb. 8 as part of the “We Always Swing” Jazz Series; the date is this year’s University of Missouri College of Arts and Science Signature Concert. Marsalis brings with him a trio of longtime collaborators to round out his quartet: pianist Joey Calderazzo, bassist Eric Revis and relative newcomer, percussionist Justin Faulkner.

In Marsalis’ most recent release, “In My Solitude: Live at Grace Cathedral,” — recorded in 2012 and released last fall — the saxophonist’s haunting melodies fill the cavernous space of the San Francisco cathedral, dipping gracefully in and out of various genres with nods and homages, and the through line vacillates between jazz and classical styles.

Especially indicative of his tendency to scale musical boundaries is the track “Blues For One.” In it, he establishes an ambulatory shuffle blues rhythm and then adds a boogie-woogie melody on top of it. That he does that all with one instrument, playing into the echoes in the church, is incredible.

The transition to a solo performance was entirely natural for Marsalis; his catholic, fluid ability is something he attributes in part to his consumption of the work of other musicians; he draws analogies from another love — sports.

There were surprises, and there were comebacks. There were consolidations, and amazing innovations. But what bound together these Best of 2014 selections was a streak of soulful emotion.

No. 3 — BRANFORD MARSALIS – IN MY SOLITUDE: LIVE AT GRACE CATHEDRAL (JAZZ): Never one to shy away from a big moment, Branford Marsalis brought his saxophones — and nothing else — to one of jazz’s most iconic settings. The results don’t supercede Duke Ellington’s initial 1960s-era Sacred Concert — held there, as well — so much as endeavor to expand the vocabulary of that stirring triumph. Ellington, back then, was focused on blending jazz, black gospel and classical into a kind of large-scale, yet intimate tapestry of emotion. Marsalis instead crafted more in miniature but at the same time, pushed in his own way to blur the lines between post-bop jazz and contemporary classical. In place of the sacred, he delved into modernity of free-form improv — and the results were stunning.

Everything about Branford Marsalis’ “In My Solitude” is excellent — or better. From the tone and improvisation of his play to high-quality recording that makes metallic clicking of his keys clear, the album is marvelous. It features a solo Marsalis offering music that is as new as four improvisations by him and as old as a sonata from C.P.E. Bach (1714-88). Of the four improvisations, No. 1 has the feeling of a piece from an etude book but with a modern flavor. He also offers a great bit of new playing on “Blues for One.” Read more »

Atop San Francisco’s Nob Hill, Grace Cathedral has long welcomed pilgrims of fine music as well as worshipers from the Episcopal Diocese of California. From the recorded sound of it, the solo concert presented there by veteran reed player Branford Marsalis, in October of 2012 was a spiritually enhancing experience transcending orthodox musical sects.

Marsalis, eldest of the four musical brothers in that New Orleans dynasty, hosted a delightfully ecumenical program that took in the American songbook, a TV show theme song, rhythm and blues, the austere borderland of New Music and jazz, and a sonata by C.P.E. Bach, as well as his own through-composed pieces and four diverse improvisations.

Along the way, Marsalis showcased his soprano, alto, and tenor saxophones, but coaxed unfamiliar sounds from the instruments, in the process making consciously varied use of the echo qualities of the spacious structure, and spontaneous use of unanticipated phenomena.

On his “Improvisation No. 3,” for example, Marsalis mimicked the venue’s echo by repeating certain phrases of his invention. Midway through the session, a siren passing on California Street made itself audible, acknowledged with a honk from the tenor sax.

The high-wire thrill of performing solo without any other instrumental support was matched by manifestation of a unique sort of freedom. On Hoagy Carmichael’s “Stardust,” absent the time-keeping rhythm section with which his jazz fans are accustomed to hearing Marsalis, the saxophonist was free both to move through extended impressionist passages before stating the familiar melodic theme, and to elasticize the lines of that theme to his heart’s content.
Read more »

Branford Marsalis: In My Solitude: Live at Grace Cathedral (Review)

In jazz, certain instruments lend themselves well to solo performance more than others: Most major pianists, at one time or another, play a solo concert and solo guitar is also plentiful in the concert hall and on record. Saxophone is riskier—sans rhythm section, the saxophonist must hold the attention of the listener via the sheer strength of melody or, with avant-gardists who’ve gone this route, ear-bending experimentalism. Branford Marsalis’ 2012 performance at San Francisco’s regal Grace Cathedral is never in danger of losing its way or its audience. Read more »

Playing a solo recital concert in a sacred and iconic cathedral is quite an undertaking. Such is the task that the adventurous saxophonist Branford Marsalis took on when he played in a solo setting at the Grace Cathedral in San Francisco on Oct. 5, 2012. This famous cathedral was the setting for Duke Ellington’s famous Sacred Concerts in the 1960s, and since 1983 it has been used for jazz, baroque, and classical concerts. Its acoustics are marvelous and its setting is inspiring to both musicians and audiences. Its beauty is comparable to cathedrals in Europe. [And it has an outdoor labrinyth…Ed.]
For his repertoire Branford included composed and improvised material ranging from Bach, compositions by Steve Lacy and Ryo Noda, and Hoagy Carmichael’s “Stardust.” Marsalis titled his improvisations simply “Improvisations 1-4.” They were composed “on the spot” based on the vibe that was present in the cathedral at the time.

Branford Marsalis - In My Solitude: Live at Grace Cathedral (2014)

Never one to shy away from a big moment, Branford Marsalis brought his saxophones — and nothing else — to one of jazz’s most iconic settings for what would become his first-ever unaccompanied performance and album.
The results, recorded in 2012 at Grace Cathedral in San Francisco, and due October 21, 2014 via Marsalis Music-Okeh Records, doesn’t supercede Duke Ellington’s initial 1960s-era Sacred Concert — held there, as well — so much as endeavor to expand the vocabulary of that stirring triumph.
Ellington, back then, was focused on blending jazz, black gospel and classical into a kind of large-scale, yet intimate tapestry of emotion. Marsalis, as evidenced by his single-instrument vehicle, is crafting more in miniature on In My Solitude: Live at Grace Cathedral — but at the same time, pushing in his own way to blur the lines between post-bop jazz and contemporary classical. In place of the sacred, he delves into modernity of free-form improv. As such, this won’t translate for fans who’ve come to his music via tandem collaborations in pop music.
In fact, In My Solitude works diligently away from those expectations, as Marsalis tracks deeper into melody, and then into far more individualistic asides, while moving determinedly away from the bawdy shower of notes associated with rock and R&B. His work here, then, is apt to recall Sonny Rollins or Sam Newsome more than, say, Sting.
Please visit Something Else! to read the full review. 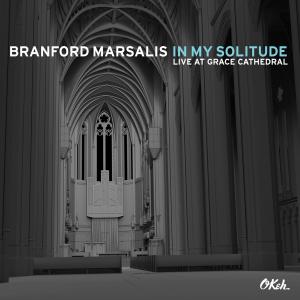 Branford Marsalis decided to quit his coveted job as the musical director of “The Tonight Show” with Jay Leno in 1994 after playing Jacques Ibert’s concerto for alto saxophone with the San Francisco Symphony under the baton of another far-ranging jazz musician, Bobby McFerrin. The performance pleased the audience and critics, but not the artist.

“It was dreadful, man. I hated the way I played,” says Marsalis, a forthright and funny man who’s unsparing in his praise for things he admires and blunt about those he doesn’t. “My tone was not good and my technique was shabby. I had to choose - I was either going to be a musician or stay in show business. After that concert, I decided I wanted to be a musician.” Read more »