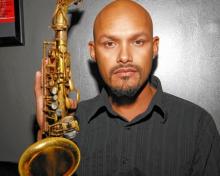 Also competing for Best Large Jazz Ensemble Album — the only category in which Hispanic artists were nominated that did not involve Latino/Mexican/World Music — is Puerto Rican saxophonist Miguel Zenón, who saw in the academy’s restructuring a chance for Latin artists to gain more widespread jazz cred. Read more »