SANTA CRUZ — As the Branford Marsalis Quartet opened its late show Monday at the Kuumbwa Jazz Center, drummer Justin Faulkner jabbed like a boxer. Hook. Uppercut. Jab, jab, jab. The band’s music was raw and rumbling, almost violent — but played with such scarifying control as to convey a sense of elegance, too. It was Muhammad Ali music: float, sting, deliver the knockout punch.

Composed by Joey Calderazzo, the group’s pianist, the tune was titled “The Mighty Sword,” which tells you all you have to know.

For the next 90 minutes — it was the second of two sold-out shows, preceding a two-night run in San Francisco — saxophonist Marsalis and his group engaged a strategy of virtuosity and cockiness, clarity and clout. It covered a lot of territory — bebop and 1970s Keith Jarrett rubato, as well as a tune associated with Louis Armstrong — but it kept coming back to the power-punch and to its own brand of blowtorch Coltrane intensity. Read more » 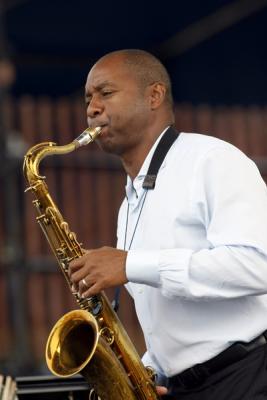