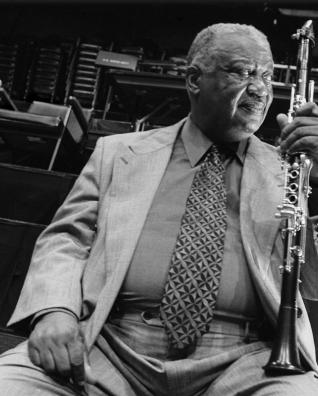 Few musicians are more deserving of honors than Alvin Batiste, the subject of a new volume in Marsalis Music’s Honors Series. As an instrumentalist, a composer and an educator, he has been a central figure in shaping modern music for the past half century, and the ten tracks on Alvin Batiste provide a too-rare glimpse of a giant who has spent far too much of his career out of the limelight.

Batiste was born in New Orleans in 1932, and is among the rare artists who have created a modern approach to improvising on the clarinet. “My dad played the clarinet,” Alvin explains, “and was a boyhood friend of the great Edmond Hall as well as a fan of Benny Goodman. I wasn’t that interested in learning the instrument when he bought one for me, until I heard Charlie Parker’s recording of ‘Now’s the Time’ at a friend’s house. You could only find records like that in one or two stores in New Orleans at the time, and my reaction was, ‘What was that?’ I started practicing seriously at that point.”

After applying himself in a high school that also produced his future colleagues Harold Battiste and Ed Blackwell as well as trombonist Benny Powell, Batiste entered Southern University in Baton Rouge, where he majored in music. The Civil Rights era was dawning, and white musicians like trombonist Frank Rosolino still had to sneak over from the segregated Louisiana State University campus to jam with Southern students, but the US Supreme Court decision in Brown v. Board of Education gave Batiste a glimpse of new opportunities. “I was a senior getting ready to graduate when the Supreme Court outlawed school segregation, which led my clarinet teacher to entice me to apply to play with the New Orleans Philharmonic. I won the audition to play the Mozart Clarinet Concerto, a gig that fell on the same night I was working with [trumpeter] Melvin Lastie, [tenor saxophonist] Nat Perriliat, [pianist] Ellis Marsalis and [bassist] Richard Payne. I wore my tux to the band’s gig, and invited all of them to what was their first symphony concert. Melvin, who was so impressed, just kept looking at me and saying ‘Mozart,’ but he pronounced it ‘Mose Art,’ which is the way we’d say it in the community.” And while many in New Orleans began calling him Mozart, Batiste’s intimates are more likely to refer to him simply as Bat.

Batiste took to the road briefly after college, including a stint with Ray Charles where he played baritone sax as well as piano when Charles was not on stage. He also did some jamming in Los Angeles with the then-unknown Ornette Coleman, but was quickly lured back home by the rich New Orleans music scene. Batiste began doing blues gigs with Guitar Slim, which the clarinetist recalls as “a rude awakening, because Slim played everything in F#, which is a rough key for the clarinet.” There were also rhythm and blues jobs with Buddy Stewart, big band music with George Williams and the modern jazz Batiste loved with friends Battiste, Marsalis, Payne and Blackwell in a group that came to be known as the American Jazz Quintet.

Returning home also gave Batiste the opportunity to enroll in the newly integrated LSU, where he became one of the first African-Americans to earn a Masters degree in both performance and composition. It was also at this point that he became interested in a career in education, after some student teaching and an offer to become the band director at a New Orleans high school. “I finished my degree, then took the band director’s job, and the first year was rough. They didn’t have uniforms for the band director, so I had to wear a student uniform. I was also frustrated by what I thought was indifference, until some older colleagues made me realize that a student who is looking out the window may be taking in more than one who looks you straight in the eye. After that first year, with both the joy and the dues you pay in helping other people, I never considered teaching to be a drag. In fact, from an aesthetic perspective, nothing is better than being able to teach and play.”

From that point forward, Batiste made his mark as one of the most important figures in the field of jazz education. In 1969, he founded a jazz studies program at Southern University, the first of its kind at an historically black campus (“I was ahead of Donald Byrd at Howard by a few months”); and two years later set the process in motion for the creation of the New Orleans Center for Creative Arts, which led to a decade of commuting between the Southern University campus in Baton Rouge and NOCCA. Between the two programs, an incredible array of talented artists benefited from Batiste’s instruction, and from the textbook he wrote, The Root Progression System. At the same time, Batiste was composing ambitious works for orchestra, including “North American Idiosyncrasies,” “Planetary Perspective,” “Musique D’Afrique Novelle Orleans” (recorded for India Navigation Records in 1984) and three operas.

With all of this activity, there were few opportunities for those outside of Louisiana to hear the Batiste clarinet. The Adderley brothers had included two of his compositions on Nat Adderley’s 1962 album In the Bag, and Cannonball produced what was supposed to be Batiste’s debut album for Riverside; but the session tapes disappeared and were never found. Cannonball did feature Batiste on his 1970 disc Messiah, and on his final session Lovers, which includes the first recording of Batiste’s “Salty Dogs.” Former student Randy Jackson (of American Idol fame) got Batiste a gig with Billy Cobham in 1977. “When I got to that band,” Batiste recalls, “there were two electric guitars, electric keyboard, and Billy was even playing electric drums. But he gave them up when he heard me, and told me that my sound was too good to add electronics. That was great – to be humble enough to take that gig, and still have an aesthetic victory.” In the 1980s there was some touring with the innovative Clarinet Summit, an all-clarinet quartet that also included John Carter, Jimmy Hamilton and David Murray; and three recordings followed under Batiste’s own name. The Honors Series volume Alvin Batiste is the first opportunity in over a decade, however, for this brilliant pioneer to receive international exposure.

In addition to vocalist Ed Perkins, a friend from New Orleans who is heard on four tracks, the disc features two of Batiste’s former students. “[Drummer] Herlin Riley was part of my first class at NOCCA, and was in a band called The Adolescents that beat my Southern University ensemble in a Jazz Fest contest; and Branford was probably in about the third wave of students to use my textbook when he was at Southern for a year. Not only do they both play great on the album, but I’ve never heard a mix that captures my clarinet sound as well. It was an honor to have Branford produce my album, because it doesn’t get any better than when your students say, ‘Thank you.’”

Two stars of the future and one new friend complete the band. “When Branford asked me to do the date, he explained about how the Honors Series includes young musicians with veterans, and said he knew just the people to get. [Pianist] Lawrence Field and [bassist] Ricardo Rodriguez were perfect. I’ve always played with young kids, since the first gig I landed under my own name. Young people tend to be more talented, and more adventurous. They’re not as earthbound as many veterans, which is one reason why I enjoyed the recording so much. Another was Russell Malone, who I had heard about years ago from a student of mine who is also from Albany, Georgia. He added Russell for a few tracks where the guitar fit, and Edith put it best when she said that his sound is like a harp.”

Edith is Alvin’s wife, who contributed lyrics to “My Life is a Tree” and served as music librarian during the sessions. Their son Maynard wrote the lyrics to “Ever Loving Star,” while the celebratory “Bumps” got its title from their grandson’s nickname. “I’ve always enjoyed the comfort and support of family,” Batiste notes. “I guess it’s a spiritual thing. Edith is one of 16 children, each of whom played something. We came up in high school together, when she was also playing clarinet. I included ‘I Wonder Where Our Love has Gone’ because that was one of the very romantic tunes we danced to when we were courting.”

While he also plays a beautiful version of the standard “Skylark” (“I love Hoagy Carmichael, and I loved hearing David Newman play it every night when I was with Ray Charles”), the majority of the program features Batiste’s own music. “I included some of my older pieces,” he explains, “because there is no reason for not giving pieces a new interpretation. ‘Bat Trad,’ which goes back to my love of Charlie Parker, is similar to one called ‘Cochise’ that a lot of the younger players like. ‘My Life is a Tree’ put Edith’s poem to a melody of mine known as ‘Road Symphony.’ I’ve written another song called ‘Edith,’ but this one is different, with more of a blues feeling. ‘Salty Dogs’ was done with Cannonball, but without the lyrics; it comes from the woman who raised me, and used to play it on the piano using only the black keys. And ‘The Latest’ is in the area of pan-tonality that John Coltrane explored, and was previously called ‘Imp and Perry.’”

The album’s moods shift from the celebratory to the challenging, a range that captures Alvin Batiste perfectly. “If I like it, I’ll play it,” he emphasizes. “I respond to a large spectrum of music.” With the appearance of Alvin Batiste, the wider world will have the opportunity to respond to one of America’s great unsung artists.

All releases by Alvin Batiste 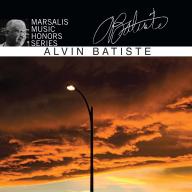 Few musicians are more deserving of honors than Alvin Batiste, the subject of a new volume in Marsalis Music’s Honors Series. As an instrumentalist, a composer and an educator, he has been a central figure in shaping modern music for the past half century, and the ten tracks on Alvin Batiste provide a too-rare glimpse of a giant who has spent far too much of his career out of the limelight.   Read more »