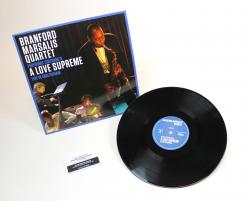 Branford Marsalis conveys his thoughts in conversation much as he does as a saxophonist. New ideas emerge with steady self-assurance, boldly and unceasingly. When he pauses he does it for emphasis – not because he has lost his train of thought or needs to reorient himself. If the tabloids could be bothered to expound on the scandals of the jazz world, Marsalis might be their go-to guy for headline-grabbing quotes. He’s called avant-garde legend Cecil Taylor’s demands on his audience “self-indulgent bullshit;” opined that “students today are completely full of shit,” overly coddled and under-criticized; and recently said of contemporary jazz, “There’s so little of it that’s actually good that when it’s good, it shocks me.” Marsalis’ hard-nosed perspective comes from decades spent as one of the most respected jazz saxophonists around, but it’s colored by his 10 years in the soap opera of American popular culture, first as a star in Sting’s touring band, then as musical director of the Tonight Show.

For more than 15 years now, Marsalis has focused once again on jazz, releasing a bevy of stellar post-bop albums and founding his own label, Marsalis Music. His latest record, Songs of Mirth and Melancholy, a duet with pianist and longtime accomplice Joey Calderazzo, explores the alternately disconsolate and ecstatic world of German classical folk music, or lieder. Read more »