‘Finding Your Roots’: Marsalis Reflects; Why Alicia Keys Pulled Out

First, the Grammy winning saxophonist had always figured that he had white, European blood in his family line – as do most African Americans – and had always assumed that it was the result of a slave master raping one of his ancestors, as is usually the case.

Dr. Gates confirmed that Branford indeed descends from a German white man, Johann Learson, who changed his name to John Learson and shows up in New Orleans in 1851. But he fathered a child with a free black woman – named Mertay Valentine, Branford’s great, great, great grandmother). The relationship appears to have been a long one, as they had seven children – each bearing Learson’s surname.

Then, Dr. Gates dropped the other bombshell. The Marsalis family does not actually descend from a Marsalis. Their blood line comes from Isaac Black, who was married to Branford’s great, great grandmother Elizabeth Montgomery. They had a child together, Simeon, before divorcing a short time later. She then married Joseph Marsalis, who adopted Simeon. The boy then took on his step-father’s name.

“When Professor Gates was telling it to me, I kind of said, ‘You know, however I got here is fine with me,’” Marsalis recalls of that moment in the episode. Read more »

The genealogy surprises revealed to Harry Connick Jr. and Branford Marsalis by Henry Louis Gates, Jr., in the latest installment of Gates’ “Finding Your Roots” series for PBS are so much fun they could count as story spoilers. So, if you want those surprises preserved, feel free to now skip ahead a few paragraphs knowing that a couple of New Orleans’ favorite sons meet some great-great-greats they couldn’t have imagined having. Spoilers a-comin’.

The episode airs at 7 p.m. Sunday (March 25), followed by a second hour in which Gates does similar digging for Newark, N.J., Mayor Cory Booker and Rep. John Lewis (D-Ga.).

The Marsalis musical dynasty, it turns out, is the product of the mid-1800s union of a German immigrant and a free woman of color.

The couple couldn’t marry, and their relationship – which produced seven children – was a statistical rarity.

“They had a relationship of mutuality and love and that kept them together, and that’s really neat,” Gates said during a recent phone interview. “Here’s something that will never be lost now for the Marsalis family, that they’re descended from this white man who defied all the common prejudices of the time. He gets off the boat and the first thing he sees is this beautiful free Negro woman, and boom they have seven children. Can you imagine writing home? Read more »

Stars search for their roots on PBS series

Decades ago, the Marsalis kids had their notion of fun.

“We’d knock on the door and say, ‘We’re doing our family tree and I think we’re related,’” Branford Marsalis recalled semi-sheepishly, “ just to watch them go, ‘Oh no, there must some mistake!’”

In truth, he knew they weren’t related to these people – “we were just being jerks” – but he also knew there were whites somewhere on the family tree. “In the hot Louisiana sun, when I … saw little blond hairs on my arm, I thought, ‘Ahh, that’s not supposed to happen.’”

The search for answers is at the core of “Finding Your Roots,” Henry Louis Gates’ new PBS series. It reflects something that has drawn Gates since the 1960 funeral of his grandfather. Read more »

PBS’s 10-part series “Finding Your Roots” illustrates how researchers never quite know what they’ll find when looking into family history, whether it’s in a public record, through the Internet or a story passed down from generations.

“Finding your Roots,” which premieres Sunday, March 25, at 7 p.m. on KUED, Ch. 7, is hosted by Henry Louis Gates Jr., the Alphonse Fletcher University Professor at Harvard University. The series looks into the family history of notable names like Samuel L. Jackson, Barbara Walters and Robert Downey Jr. Gates invites all to look back in their family lines and find what it is that makes them who they are.

“Genealogy is more popular than ever, but it’s far more than a solitary pastime,” says Gates, whose previous projects include “African American Lives” (2006), “African American Lives 2” (2008) and “Faces of America” (2010). “It’s a fascinating endeavor that can drastically alter both history and the way we think of ourselves.”

The premiere episode features guest biographies of musician/actor Harry Connick Jr. and composer/band leader Branford Marsalis. The two are “dear friends” who grew up together in New Orleans with its rich musical heritage.

Gates uses “every tool available” to put together their “book of life.”

“Genealogists help stitch together the past, using the paper trail their ancestors left behind,” Gates says.

Their story “illuminates the complicated history of race in New Orleans,” he says. Read more » 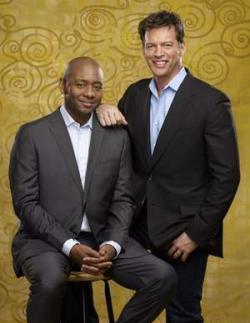 “Ready to go?” Branford Marsalis prods Harry Connick Jr., placing his hands on Connick’s shoulders. The celebrated musicians and old friends are at a New York rehearsal hall for a photo shoot, but Connick can’t pry himself away from the piano.

Connick and Marsalis have remained close friends and collaborate on musical and philanthropic projects, such as supporting artists in their native city after Hurricane Katrina. Now, on Sunday’s Finding Your Roots With Henry Louis Gates, Jr. on PBS, it is revealed that while their ancestors charted very different paths, the family trees were shaped by common historical events.

Both have European ancestors who landed in the South.

Connick’s great-great-grandfather arrived in Mobile, Ala., from Ireland and wound up a Confederate soldier in the Civil War. A bit shaken by that revelation, Connick discussed it with his buddy, who reassured him. “I said, ‘Of course he was,’” Marsalis recalls. “‘What else would he have done?’ That doesn’t have any bearing on how Harry and I are with one another. It was a different time.” Read more »