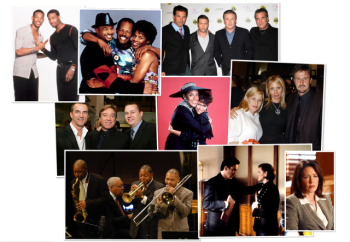 JAZZ NOTE 19 – HAVE A FAMILY REUNION

What makes New Orleans not only a musician’s town but also a place that produces musical families? Take the Marsalis family. There’s Wynton, one of jazz’s more tireless promoters. Then you have Branford, Delfeayo and Jason. Plus, don’t forget the man who started it all, Ellis.

What is surprising about this multi-gifted family is how they never grew up playing together à la the Von Trapps, the Osmonds or Hanson. Ellis was aware of the gimmicky nature of children dressed in uniformed costumes trying to please a taskmaster of a father. He had no intention of pushing his kids to follow his tradition. If Ellis’ sons wanted to learn jazz, he would show them how, but they would have to discover what it meant to them on their own.

That’s what Ellis did most of his life, first teaching music in high school before moving on to New Orleans University. In fact, The Marsalis Family: A Jazz Celebration is a concert that only came to fruition because Ellis was retiring from the University’s jazz department. Only at the end of a distinguished career would his sons come to play together for the very first time. Read more »

Branford Marsalis will be in good company Friday night at Proctors

SCHENECTADY — The art of collaboration in jazz is a delicate thing. The right combination of performers can make all the difference — not just in the who, but in the how.

Noted Grammy-winning saxophonist Branford Marsalis is a case in point. His performance Friday night at Proctors Theatre will mark his first appearance in the region in several years, and it will feature both the familiar Branford Marsalis Quartet and a newer duet with pianist Joey Calderazzo.

In 1998, the delicate balance of the quartet was briefly disrupted by the sudden death of pianist Kenny Kirkland. His subsequent replacement by Calderazzo was a seamless transition for the foursome, which also includes bassist Eric Revis and drummer Jeff “Train” Watts. That temporary imbalance opened Marsalis’ eyes to new possibilities.

“To me, my favorite jazz musicians are like good talk-show radio hosts,” Marsalis said. “A good talk-show host has to know a little bit about a lot of things and be able to talk about them with some knowledge. Over the years, Joey has developed. He knows all the modern stuff. He’s also fluent with the classics, with Brahms and Schumann. It shows in the |lyricism of the songs he writes. We have so many options in how we play now.” Read more »

In a city known for musical families, few have affected the jazz community in New Orleans and beyond as greatly as the Marsalis clan. As a fluent pianist and composer, patriarch Ellis Marsalis Jr. has gigged with Al Hirt’s band and Bob French’s Storyville Jazz Band, led his own groups and released his own albums.

In 1989, he returned to New Orleans from Virginia to establish the jazz studies program at the University of New Orleans. He encouraged his students to perform at local nightclubs, simultaneously gaining experience and infusing the scene with fresh talent. He continues to perform most Friday nights at Snug Harbor.

Four of his and wife Dolores’ six sons are professional musicians.

Branford Marsalis, a saxophonist with an especially modernist approach, served as the bandleader on “The Tonight Show with Jay Leno” and recorded and performed with the pop star Sting, among many others. He founded a jazz record label, Marsalis Music, and now lives in North Carolina. Read more »

Saxophonist, composer and bandleader Branford Marsalis’ accomplishments surpass those of almost any other player in his generation. The oldest sibling from the famous New Orleans musical family that also includes Wynton, Jason, Delfeayo, Ellis III and pianist father Ellis, Branford’s shown a brilliance on tenor, soprano and alto that has earned him three Grammys and an NEA Jazz Masters award. He’s also been highly praised for impressive contributions to Broadway plays (a 2010 Drama Desk award and a 2010 Tony nomination for musical scores) and films, as well as extensive appearances with symphony orchestras and chamber ensembles, plus several  classical recording sessions.

But when he returns to the Schermerhorn Symphony Hall Friday night for a concert that will feature duo and quartet performances, he’ll be focusing on the fiery, thematically diverse and engaging jazz that’s been his hallmark over the lengthy history of his current ensemble. In fact, emotional satisfaction remains more a point of emphasis than technical proficiency, even though he’s certainly among the premier modern saxophone soloists. Read more »

This unexpectedly quirky live get-together by the Marsalis family, with Harry Connick Jr among the guests, was caught at the Kennedy Center to commemorate the patriarch, pianist and educator Ellis Marsalis’s receipt of a lifetime achievement award. It’s also a fundraiser for the new Center for Music bearing his name in New Orleans, and was made to coincide with the fifth anniversary of Hurricane Katrina’s assault on the family’s home town. All those honourable motivations might have turned the gig into a restrainedly respectful affair, but in fact it’s a hoot – Read more »

The eldest son in a famous clan of jazz musicians, saxophonist/composer/educator Branford Marsalis is enjoying a robust and variegated career. Known mainly as a jazz artist, he is equally at home with classical music and contemporary pop. He spent two years as musical director of “The Tonight Show With Jay Leno” and another two performing and recording with Sting (“Dream of the Blue Turtles,” “Nothing Like the Sun”). He still performs with Sting on occasion.

On Sunday evening, Marsalis will perform at Orchestra Hall with his formidable quartet. (This is not a star-saxophonist-plus-rhythm-section quartet, but an ongoing, provocative, stimulating four-way conversation.) He’ll share the bill with another famous New Orleans native, trumpeter Terence Blanchard, who will bring his quintet to the big stage.  Read more »

The entire Marsalis Family was awarded , the first family ever to be awarded together.

The National Endowment for the Arts (NEA) is recognized as a powerful force in funding Art and is dedicated to artistic excellence in every way .The NEA paves the way for the projects that pass the test on creativity , originality and talent. In four decades they have awarded over 4 billion dollars to exceptional Art Projects in the United States. The NEA was established by Congress in 1965 as an independent agency of the federal government. In 1995 it was awarded Tony Honors for Excellence in Theatre.

The NEA is not limited to Art but also supports music, Musical theatre, Opera and dance. One of the most important accomplishments has been the Jazz Masters program held annually. Read more »

Ellis Marsalis is a father, a musician, and much more

You have to bloom where you’re planted.

For Ellis Marsalis, pianist and patriarch of a musical dynasty, that meant blooming as a creative modern-jazz pianist in the traditional-jazz soil of New Orleans, where for a long time there wasn’t much demand for what he was putting down.

The conditions weren’t favorable, but Marsalis, who brings his quartet to the Folly Theater on Friday, still managed to become something of a local legend in the Crescent City, even before his kids became famous and the whole jazz world started paying attention. He bloomed as a teacher and mentor, and not just to his own family. Read more »

Just two months in, 2011 has already been a banner year, a true benchmark, for jazz’s first family. Last month, the five musical Marsalises — pianist and patriarch Ellis, world-famous trumpeter and composer Wynton, versatile saxophonist Branford, trombone great Delfeayo and dynamic drummer Jason — were collectively named one of the National Endowment for the Arts’ Jazz Masters, the highest honor an American jazz musician can hold. It was the first time the honor was bestowed upon a group. Despite the unbelievable musical wattage each member possesses, when the time came to pick a spokesman for the brood, there was no doubt who would take center stage.New York Times writer Nate Chinen set the scene, detailing how Ellis the elder delivered a humble, wistful acceptance speech that paid tribute to jazz masters “past and passed on.” He and his sons then took the bandstand together for a surprisingly rare collaboration, “a brightly buoyant finale.”