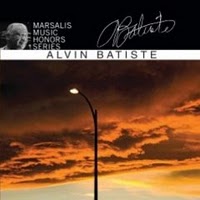 The late Alvin Batiste , who initially found his muse in Charlie Parker’s “Now’s the Time,” was never that way. His isn’t a same-ole, same-ole southland sound so much as a retro-fitted bebop update, with period instruments. Later, he dove into Sonny Stitt—and Batiste told me, a few years before his untimely passing, that he never emerged.

Stitt’s playing, Batiste said that day, allowed him to recognize his own “intuitive consciousness.” That Batiste did it in New Orleans, his home but also the birthplace of Dixieland’s anachronistic tourist-trap deathlessness, was all the more remarkable.

Batiste—not a household name, but deeply admired among musicians—lived as he died, passing on even as he prepared for a show at 2007’s Jazz Fest, but not before recording one last blast of definitive music as part of the Marsalis Music Honors Series on Rounder Records.

Batiste could speak with passion about how rag eventually fit together with blues in the Big Easy to make modern jazz, but he never agreed to stop there. Not in conversation, and not in his music.

New Orleans, Batiste said then, is the model for global civilization—with jazz at its center—and his albums, rare as they were, stand as a living embodiment of that aesthetic. Loose, but never comfortable, Batiste played with a firebrand focus until the end. At one point, during the playback of the superlative track “Bumps” (his grandson’s nickname) from this album, Batiste was brought to tears by the moment.

You might not have heard this music from him, unless you studied the liner notes from old LPs by guys like Julian “Cannonball” Adderley (a new version of “Salty Dogs,” from that period, is included), paid close attention on Ray Charles tours, or knew where to find him in New Orleans. Yet, along the way, Batiste also broke some ground in Billy Cobham’s fusion band, smashed the color barrier in the New Orleans Philharmonic, established a first-of-its-kind jazz studies program (at Baton Rouge’s historically black university, Southern), helped found the New Orleans Center for Creative Arts, and toured in the 1980s with the innovative Clarinet Summit, which also included Jimmy Hamilton , among others.
The appearance on three tracks here of saxophonist Branford Marsalis as well as Marsalis family sidemen Russell Malone on guitar and Herlin Riley on drummer, contribute mightily to the hometown vibe. (Marsalis and Riley were, along with Donald Harrison and Henry Butler , former students.) And there are times when you can relax with convention: Malone strikes the appropriately staid pose on a standard like “Skylark,” which still sounds as lively today as it must have the day that Hoagy Carmichael wrote it.

But, by and large, this is not a record that spends too much time looking over its shoulder. Batiste wasn’t, even at the last, that way. It’s why he remains that most special of things: The old-school modernist.