Marsalis, Branford and Joey Calderazzo - Songs of Mirth and Melancholy

When the Branford Marsalis Quartet released their last album Metamorphosis, Marsalis – being a democratic kind of bandleader – gave each of his colleagues some space for their compositions. These pieces were fairly varied, but it was the work of pianist Joey Calderazzo that particularly impressed me. His relaxed, lyrical style made listening a real pleasure and some tracks were the sort you could enjoy for hours. So it was exciting to see that he and Marsalis were to work together for this intimate collaboration, free of drums and any other outside interference. Read more » 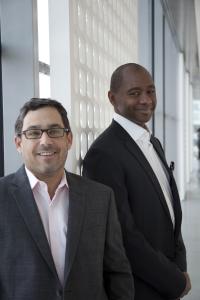 Tickets are now on sale for the WORLD PREMIERE of Branford Maralis & Joey Calderazzo’s duo project, Songs of Mirth and Melancholy, at the 2011 TD Toronto Jazz Festival. The performance takes place at The Royal Conservatory’s Koerner Hall in Toronto, Ontario on June 29. For more information and to purchase your tickets today, please visit the jazz festival’s website! We hope to see you there.

Born of an evolving love of music and set in the deep focus of serious listening and learning, Songs of Mirth and Melancholy, is full of virtuosity and joy, touching the listener with its expressiveness, melody, emotion; those elements of music that transcend genre and period and speak to us of inspiration and beauty. Comprised primarily of original compositions from each musician, a Wayne Shorter tune paying tribute to that great man and a nod to Brahms, the duo presented here provides the listener with a glimpse into their ever deepening musical journey.

For jazz pianist Joey Calderazzo, music has always been a part of his life. The piano first struck a chord with the musician when his childhood friend took up the instrument.

“My next door neighbor played the piano and always had to practice, so instead of going home I’d stay and watch him practice,” Calderazzo said. “I thought it was something I could do too, so at about eight I asked to take piano lessons.”

At the age of 17, Calderazzo got his foot in the door of the music industry by sitting in with New York jazz musicians.

“I would go to jam sessions, or I would have a friend that played with somebody and let me sit in with them,” Calderazzo said. Read more »

One good turn deserves another. So, less than a month after he was in town with the Branford Marsalis Quartet, pianist Joey Calderazzo is back on Saturday at the helm of his own trio.

Calderazzo, appearing this time at the Blue Room, has spent 12 years in the Marsalis quartet and has been associated with the saxophonist for upward of 20 years. But, as he’ll prove Saturday, he’s no mere sideman.

A native New Yorker, he’s one of those “young lions” who emerged in the 1980s. A lot of people first heard him with tenor saxophonist Michael Brecker about 1987.

The theme of this year’s Detroit International Jazz Festival was Flame Keepers, and the heritage and jazz history on display at the festival shows the music to be very much alive and in good hands.

Where else can you see Barry Harris watching Mulgrew Miller from a front row seat? Or young Tia Fuller grab a chair to make sure to catch Roy Haynes’ burning set? Or watch Gerald Wilson grow young before our eyes leading a dynamic big band through some punchy arrangements?

Highlights of the last day of the festival included an amazing set of music by Branford Marsalis Quartet. Caught backstage and asked, “What’s your personal highlight of the festival?” Wess “Warmdaddy” Anderson answered, “This right here.” When questioned what he thought of Branford he answered immediately and authoritatively: “Branford Marsalis is the greatest living saxophonist.”
Read more »

Jazzy day in Newport, by George