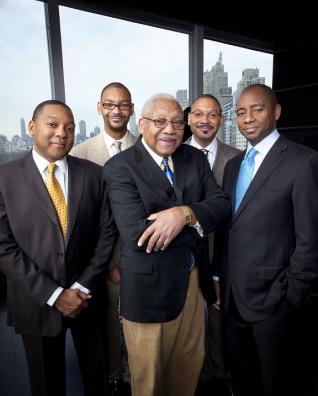 As jazz evolved from its origins to incorporate new forms and techniques, and to attract players and listeners from around the US and the world, both the tradition of making the music a family affair and the central role of New Orleans in the music’s progress were overshadowed. How fitting, then, that over the past two decades, a new wave of interest in and appreciation of jazz music has been spearheaded by another New Orleans family, the Marsalises. With father Ellis as mentor, older brothers Branford and Wynton as leaders of a new generation, and younger siblings Delfeayo and Jason as rising stars, the Marsalis clan has been acclaimed through the individual recordings, performances, compositions, and educational efforts of its members. Until a tribute concert for Ellis in August 2001, however, these extremely talented musicians had not joined together in a single ensemble. The success of that evening, which has been documented in a PBS special and a Marsalis Music compact disc, inspired the family to set aside time in their busy schedules so that they could continue the partnership in a series of special performances that are sure to be among the concert highlights of the year.

Pianist Ellis Marsalis was born on November 13, 1934. After graduating from Dillard University and serving in the Marine Corps, he chose to pursue a career as a modern jazz musician in New Orleans, a city where virtually all of the attention was directed toward more traditional and popular styles. As a founding member of the American Jazz Quintet, Ellis and equally visionary contemporaries including clarinetist Alvin Batiste, saxophonist Harold Battiste, and drummer Edward Blackwell charted new directions for jazz in New Orleans in the 1950s. At the same time, and for the next quarter-century, Ellis provided for his family by holding down more commercial jobs, including leading the house band at the Playboy Club, working in the combo of trumpeter Al Hirt, and teaching music at the high school level. In 1974, he became the director of Jazz Studies at the New Orleans Center for Creative Arts, an arts high school that drew talented young musicians from all over the city. Among the students who received the benefits of Ellis’ instruction are Terence Blanchard, Harry Connick, Jr., Donald Harrison and Nicholas Payton, as well as his own children. After his sons achieved success in the 1980s, the wider world belatedly discovered Ellis’ talents as both musician and educator. He began recording, most often in a trio context, and extended his teaching efforts to the college level. It was at the concert marking his retirement from a faculty position at the University of New Orleans that Ellis Marsalis and Sons gave its first public performance.

Saxophonist Branford Marsalis, the eldest of Ellis and Dolores Marsalis’ six sons, was born on August 26, 1960. He studied at NOCCA and at Berklee College in Boston before leaving school to tour with the big bands of Art Blakey, Lionel Hampton and Clark Terry. After a brief stay in Blakey’s legendary Jazz Messengers in 1981, where his brother Wynton already occupied the trumpet chair, Branford joined Wynton’s original quintet and remained for three years, a period during which he also toured and recorded with Miles Davis and Herbie Hancock. Branford released his first recording as a leader in 1984 and organized his own quartet in 1986. The most eclectic of the Marsalises, Branford has performed with Sting and the Grateful Dead, served as musical director of The Tonight Show with Jay Leno, led the electric, hip-hop influenced band Buckshot LeFonque, and collaborated with classical orchestras and chamber ensembles. He has also taught at Michigan State University, and currently teaches at San Francisco State. Throughout these diverse activities, Branford has maintained his quartet, which continues to perform worldwide. After nearly two decades as a Columbia recording artist, he launched his own Marsalis Music label and in August 2002 released Footsteps of Our Fathers, his tribute to Ornette Coleman, Sonny Rollins, John Coltrane and the Modern Jazz Quartet.

Trumpeter Wynton Marsalis, born October 18, 1961, has become the most widely heralded and influential jazz musician of his generation. A recognized talent in both the jazz and classical fields from his youth, Wynton followed his years at NOCCA with studies at Tanglewood and Julliard, leaving the latter in 1981 to tour with Art Blakey’s Jazz Messengers and Herbie Hancock. In that same year he formed his first band, featuring his brother Branford. Subsequent small bands under Wynton’s leadership include a quartet with pianist Marcus Roberts, and a septet that toured most recently in 2001. The ’90s found Wynton devoting most of his time to Jazz at Lincoln Center, where he has served as Artistic Director since the program’s founding in 1987, and where he has led the Lincoln Center Jazz Orchestra on national and international tours for the past decade. Wynton has also been heralded as a composer, and in 1997 became the first jazz artist to receive a Pulitzer Prize for his extended work Blood on the Fields. He is an equally committed and tireless educator, and has made a great impact with his NPR series Making the Music and his PBS series Marsalis on Music, as well as through the countless workshops he has conducted around the world. His jazz and classical performances, and those of the Lincoln Center Jazz Orchestra, have been extensively documented on Columbia recordings.

Delfeayo Marsalis, born July 28, 1965, has made an impact as both a trombonist and a recording producer. While at Berklee College, he devoted the bulk of his studies to studio production, and was soon producing albums for his father and brothers as well as artists including Terence Blanchard, Harry Connick, Jr., Mingus Dynasty, Courtney Pine, Marcus Roberts and Jeff “Tain” Watts. His trombone has been heard most prominently with drum legend Elvin Jones’ Jazz Machine, as well as on recordings by Ruth Brown, Wycliffe Gordon, Al Grey and Donald Harrison, and his own efforts for the Novus and Evidence labels. In recent years, Delfeayo has expanded his interests to include theater, and he has founded a theater company in New Orleans.

His father and brothers will tell you that drummer Jason Marsalis, born March 4, 1977, is the most precociously talented member of the entire family. Jason received schooling from his father both at NOCCA and on the bandstand, where he has appeared for the past decade as a member of Ellis’ trio. Other important associations for Jason include his prominent role in the trio of Marcus Roberts and his efforts as a founding member of Los Hombres Calientes. Currently, Jason leads his own band, which has recorded two albums for the Basin Street Jazz label.

All releases by The Marsalis Family 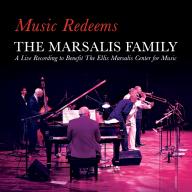 On August 24, 2010, Marsalis Music and Redeye Distribution will release a rare, new album by New Orleans’ own, The Marsalis Family, recently honored by the National Endowment for the Arts with a 2011 Jazz Masters Award Fellowship. All proceeds from the project will go straight to programming support for the Ellis Marsalis Center for Music, an education center and heart of the New Orleans Musicians’ Village community, conceived in 2005 by Branford Marsalis and Harry Connick Jr. in partnership with New Orleans Habitat for Humanity following Hurricane Katrina. Read more » 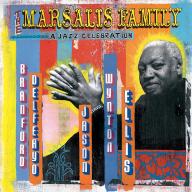 The Marsalis Family: A Jazz Celebration

The Crescent City’s most celebrated jazz family led by the patriarch, Ellis Marsalis, has
recorded together for the first time. What may be the most eagerly anticipated family
affair in jazz history, The Marsalis Family: A Jazz Celebration, was released on
Marsalis Music on February 4, 2003. The album features all of the music-making
Marsalises - father Ellis on piano and sons Branford (tenor and soprano saxophones),
Wynton (trumpet), Delfeayo (trombone) and Jason (drums) - along with bassist Roland Read more » 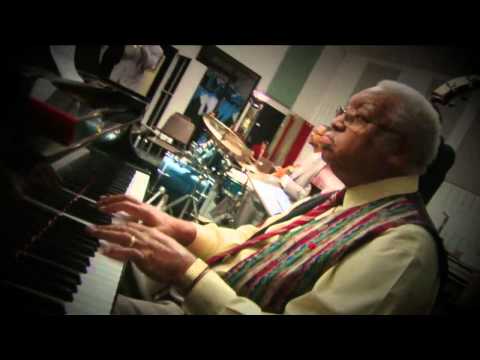