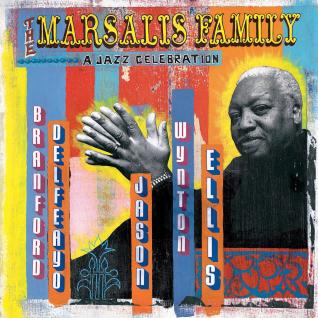 The Crescent City’s most celebrated jazz family led by the patriarch, Ellis Marsalis, has
recorded together for the first time. What may be the most eagerly anticipated family
affair in jazz history, The Marsalis Family: A Jazz Celebration, was released on
Marsalis Music on February 4, 2003. The album features all of the music-making
Marsalises - father Ellis on piano and sons Branford (tenor and soprano saxophones),
Wynton (trumpet), Delfeayo (trombone) and Jason (drums) - along with bassist Roland
Guerin and a special guest appearance by Harry Connick Jr.

Over the years, many attempts have been made to bring this illustrious family together. It was not until August 4, 2001 that schedules and the alignment of the stars allowed the Marsalises to join forces on one bandstand. The occasion was a concert marking Ellis’ retirement from teaching duties at the University of New Orleans, and the school’s establishment of a chair in his name. Before a packed house in the Kiefer UNO Lakefront Arena, the Marsalis family members were so inspired by each other’s
presence that, as Delfeayo puts it; the performance ʺreflected our family collectively and individually.ʺ

The center of attention is Ellis, the brilliant pianist, composer and educator who
spawned both a family of jazz giants and (through his example and his teaching)
several generations of young and influential jazz artists. In settings that include, trio,
quartet and sextet, Ellis’ luminous touch, probing sense of harmony and keen melodic
imagination are brought front and center. The inclusion of four of his best-known
compositions, ʺSwinging at the Haven,ʺ ʺAfter,ʺ ʺNostalgic Impressionsʺ and ʺTwelve’s It,ʺ underline Wynton’s observation that ʺthrough his playing and his teaching, my father has been so instrumental in the cultural life of New Orleans.ʺ

But Ellis is not the only family member who shines on The Marsalis Family: A Jazz
Celebration. Youngest son Jason provides sympathetic percussive support throughout,
stepping forward with a subtle, lyrical drum solo on the trio feature ʺThe Surrey with
the Fringe on Top.ʺ Delfeayo’s trombone is featured in a limber nod to Duke Ellington
and Ellington trombonist Tyree Glenn on ʺSultry Serenade.ʺ Branford and Wynton turn
Branford’s blues ʺCain and Abelʺ into a hearty, heated two-part invention. And all four
brothers, plus stalwart bassist Roland Guerin, join their father on four tracks, including a salute to Louis Armstrong on ʺStruttin’ with Some Barbecue.ʺ

Also performing at the concert and included on the CD is one of Ellis’ most illustrious
students, Harry Connick, Jr. Connick performs ʺSt. James Infirmaryʺ with trombonist
Lucien Barbarin and joins Ellis and sons for the spirited ʺTwelve’s It.ʺ

Branford Marsalis sums up the results by noting that ʺEverybody came to play the
music as well as they possibly could play it.ʺ The spirited results, by turns fiercely
swinging and deeply lyrical, confirm that the company and the occasion elevated each
family member to new levels of eloquence.

Other Releases by The Marsalis Family

On August 24, 2010, Marsalis Music and Redeye Distribution will release a rare, new album by New Orleans’ own, The Marsalis Family, recently honored by the National Endowment for the Arts with a 2011 Jazz Masters Award Fellowship. All proceeds from the project will go straight to programming support for the Ellis Marsalis Center for Music, an education center and heart of the New Orleans Musicians’ Village community, conceived in 2005 by Branford Marsalis and Harry Connick Jr. in partnership with New Orleans Habitat for Humanity following Hurricane Katrina. Read more »