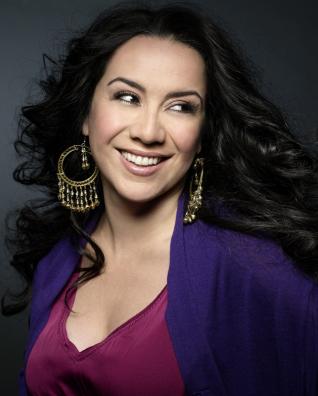 “…the voice of an angel…”
- Ed Morales, NEWSDAY

“…she has mastered the essential elements of jazz with startling effectiveness.”
- Don Heckman, THE LA TIMES

“Claudia sings in the tradition of the great ones. Her sound is her own.”
- Abbey Lincoln

“Claudia has great instincts, and is one singer who is actually a musician – one of us.”
- Branford Marsalis

Chilean singer/songwriter/arranger CLAUDIA ACUÑA possesses one of the most beautiful and compelling voices in jazz and creative music. While singing primarily in Spanish, her music crosses language barriers to communicate with power and deep feeling.

Acuña was born in Santiago, Chile and when she was quite young, her family moved first to the mining town of Rancagua and then to Concepcion, the site of a rich arts community. A guitar was always around the house, as is the case in most South American homes, but her parents provided limited exposure to music and little encouragement when their daughter expressed an interest in the arts. “They saw music as a hobby, not a career,” she says. Yet once she heard recordings by Violeta Parra and Michael Jackson on the radio, she decided to become a singer. “The family did not own a television, so my imagination became my own TV. I began to fantasize about being in front of an audience, and would search the radio for things that moved me – from Parra and Michael Jackson to Earth, Wind and Fire to Mozart to movie musicals. When I finally heard people like Erroll Garner and Thelonious Monk, I was drawn to the music’s freedom without knowing that what they played was called jazz.”

Teachers and friends who heard Acuña performing in school choirs and folk groups provided early encouragement, and helped her to find performing opportunities that would not antagonize her parents. “I was the only member of a college choir who did not attend the college, for instance, and my parents approved of that because it was at a college. When I became older, and chances to perform with rock or jazz groups arose, I’d start lying about going to a friend’s house. I would also sneak into the conservatory on the way home from high school and try to memorize the lessons. I would sing anything, and after people heard me sitting in and began to hire me, the money I made became the excuse to get work. “

In 1991, Acuña moved to Santiago, where she quickly became active recording jingles and doing voices for cartoons. Her own musical concepts also began to develop, nurtured by an older professional couple she met who told her that she was really a jazz singer. Listening to the vast record collection of these new friends and singing at their house in weekly sessions with older musicians left her inspired but frustrated, as she did not know people her age who shared her passion. After seeing a film about the musicians and clubs in New York, and meeting touring musicians who visited Chile and provided encouragement, she found the necessary confidence to visit the United States. “I was insecure, because I had not attended music school and did not speak English at the time; but I had enough confidence, plus a little bit of craziness, to follow my passion. One day in 1995, I just said, `that’s it, I’m going to New York.’”

While Acuña had planned to study at one of the area’s jazz schools, she soon realized that tuition costs were prohibitive. But she received encouragement when a teacher at one audition told her that she did not really need school, and that she could learn “the old fashion way” at the city’s jam sessions and clubs. Following this advice, Acuña began to meet other young musicians and receive calls for gigs, many of which required that she function like another instrument in the ensemble. “I felt more at home in New York than I ever felt in Chile,” she explains, “even though I didn’t speak the language well and was running out of money. “ A series of part-time jobs led to work on the staff at the Blue Note nightclub, where she heard many legendary artists who strengthened her determination to find an original voice. “I had heard Dizzy Gillespie’s United Nation Orchestra in Chile, and felt that if he could embrace Latin music, then I could bring my own background to jazz.”

It was at the original Small’s in Greenwich Village, a hotbed of young talent, that Acuña made the greatest strides, meeting and working with such artists as Jeff Ballard, Avishai Cohen, Frank Hewitt, Guillermo Klein, Jimmie Lovelace, Brad Mehldau, Harry Whittaker and the man who became her musical director and closest collaborator, pianist Jason Lindner. She was given a key to the club, which allowed her to rehearse on what became a daily basis. After initiating an early gig at the Zinc Bar, offers from other Manhattan clubs and restaurants followed. “Everyone was driven to explore, and was so supportive,” she recalls. “It was like a little music gang. I knew then that I had made the right decision, and had arrived at the right place. I wasn’t in school, but every note I heard was a lesson.”

Record companies began to show interest in Acuña after a tape of one of her live performances began to circulate without her knowledge. She was signed to Verve Records in 1999, where she recorded two albums, Wind from the South and Rhythm of Life. A third disc, Luna, was recorded for MAXJAZZ in 2004, and her debut on the Marsalis Music label, Este en Momento, will be released in April 2009. Acuña has also recorded and toured with a host of performers including George Benson, Joey Calderazzo, Billy Childs, Roy Hargrove, Tom Harrell, Christian McBride, Danilo Perez and Pablo Ziegler. Over time, she has performed more of her material in her native language. “I always promised myself that I would honor my background,” she says, “and I’ve gone from the point where there were always one or two songs in Spanish to where there are always one or two in English. But I don’t want to lock myself into a formula because my growth has been organic, like a seed that produces more leaves, branches and flowers with each year.”

Acuña’s appointment as spokesperson for the child-focused relief agency World Vision Chile underscores her commitments beyond music. “I heard about World Vision almost by accident, and grew more involved as I saw that the organization works,” she says. “I’m interested in everything that involves sustaining mother earth, and children are a priority. Any organization that does not just label children `delinquent,’ but serves their needs, I’ll be involved.”

All releases by Claudia Acuña 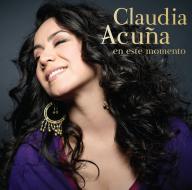 Whether delivered in the Spanish of her native Chile or the English that has served her well during her years in the United States, Claudia Acuña creates music resonant with determination and compassion, commitment to struggling for and sustaining her hope for a better world. Read more » 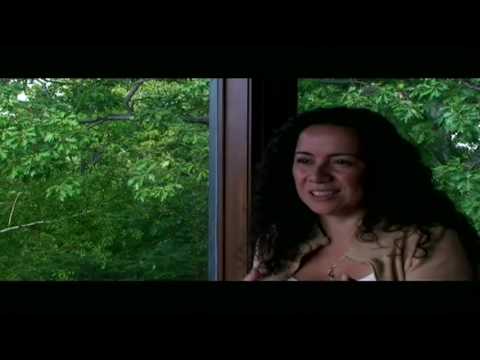