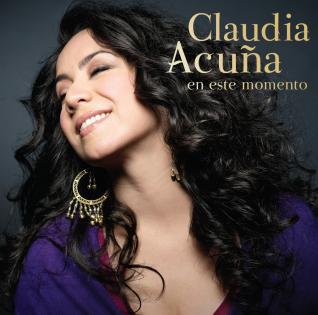 Whether delivered in the Spanish of her native Chile or the English that has served her well during her years in the United States, Claudia Acuña creates music resonant with determination and compassion, commitment to struggling for and sustaining her hope for a better world. “The majority of musicians who I know or admire want to make a piece of music their own,” she says, while also noting that “words are written for a reason, and the images in lyrics are a key to motivation.” The images that inspire Acuña, drawn from her own creations as well as classics of Central and South America, coalesce in her Marsalis Music debut En Este Momento (At This Moment) and create a program powerful in  both its message and its musicality.

The 10 tracks on the disc chart Acuña’s growing commitment to synthesize the heritage of her background and the jazz tradition in seamless personal expression. “I’ve always dreamed of being a singer, and when I discovered jazz and the greatest jazz singers I could not believe the freedom they could find in every song, a freedom that does not exist in any other music. I love jazz’s tradition, but I always promised myself that my music would pay tribute to who I am, which is why all of my albums contain at least one song from South America. I still sing standards that have meaning for me; but time is a wonderful thing, because as you develop and discover, you gain the confidence to apply your curiosity to both the music you grew up with and the music you learned from others. Musicians of my generation have shown how much smaller the world has grown in the past 20 years.”

Acuña applies these insights on En Este Momento in a wide-ranging program that includes several Spanish-language classics. “Some of these songs I’ve known since I was little, like ‘La Mentira,’ which was a big hit in the late ‘40s by Lucho Gatica, one of the first international crossover artists, or the three songs by Victor Jara, who is like Bob Dylan to many Chileans. Others have come to me along the way. A classical musician introduced me to the music of [Uruguayan singer and percussionist] Ruben Rada, who wrote ‘Sueño Contigo,’ and I finally got to meet Ruben last year when I was at the La Pataya festival.”

All of this music displays an integrity and vision that, in some cases, has cost the composers their lives. Jara, one of the leaders of the Nueva Cancion Chilena movement, was murdered in a football stadium after the Pinochet dictatorship seized power in 1973; Alberto Carrillo, who pioneered the music of Chile in Mexico and wrote “La Mentira,” also died tragically. More recently, Fernando Solanas, the Argentinean director who contributed the lyrics to Astor Piazzolla’s “Vuelvo Al Sur,” was the target of an assassination attempt while running for political office. Acuña emphasizes, “I did not choose songs to revisit painful personal histories, but to celebrate the lives and commitment of these great musicians through their music. I pick songs with stories that I can relate to, and after they have spoken to me I hear things of my own that I want to add.”

Acuña’s growing confidence in her own songwriting can be heard in two original compositions where she contributed the melody and lyrics, with additional music supplied by members of her band. “‘Tulum,’ which I wrote with Juancho Herrera, is for the city on the Yucatan Peninsula in Mexico where I went to become totally disconnected from the everyday world. I traveled there by myself and stayed on the beach in a place with no electricity and little more than a bed. The experience showed me the magic of life and how the simplest things can have the most meaning. At a time when I was growing disenchanted, it allowed me to be enchanted by life again.

“‘That’s What They Say’ was a collaboration with Jason Lindner, inspired by the early days of the Iraq war and my experience as a spokesperson for the children’s organization World Vision Chile. I was horrified by the conditions in which so many children live, and to this day cannot understand how those of us who are more fortunate remain in our own bubble. Children are not born delinquents, they respond to what society has done to them. These are the feelings I wanted to express, and after Jason gave me chords and a groove the melody and lyrics – some in English, some in Spanish – came out like a flood of water. The song is a question to God and is both sad and angry, but at heart quite simple.”

Pianist Lindner and guitarist Herrera, together with bassist Omer Avital and drummer Clarence Penn, form the band that has allowed Acuña to realize such personal expression. “Jason has been my piano player, musical director and best friend for ten years, my closest collaborator, and Omer and Clarence are musicians who I have also known for years. Juancho is another important musical partner, although we’ve only worked together for two years. It was easy for me to meet all of them and for us to create music together on the New York jazz scene, because we share a hunger to develop our own voices and to grow. Even as we continue to mature, we retain that hunger and the willingness to explore, and through performance we have developed a language.”

The interaction of these talented artists has created arrangements as pungent and seductive as Acuña’s singing. “I would never simply hand a song to an arranger,” she explains. “The song choices are mine, but I believe in teamwork. I’ll begin by working closely with Jason or Juancho; but however clear and strong the initial arrangement might be, everyone is free to add his or her own ideas at rehearsal. Like any conversation, you are not the only one participating when you create music, and it is important to me that I remain free to be led somewhere else. And I’m so lucky to develop music with a band where the relationships go beyond the music paper. That’s when you feel like you’re flying.”

Acuña quickly developed the same feelings toward producer Branford Marsalis, who she met when she participated in the recording of Joey Calderazzo’s Marsalis Music album Amanecer. “It was a very different experience for me to work with a producer like Branford who is a musician first and has strong opinions about the music and being a bandleader, yet also embraces my music so strongly and wants to help shape what I do rather than trying to change me. It has been a wonderful process to see his commitment to recording live, his concerns about sound, and his belief in the concept of a band.”

The meeting of artist and producer could not have come at a more opportune time. “I often tell the story of hearing Dizzy Gillespie’s United Nation Orchestra and realizing that, if Dizzy could embrace Afro-Cuban music that strongly, I could do the same with jazz. As I’ve learned more about technique, I have tried to remain open to all kinds of music while retaining the freedom that is unique to jazz. And I’ve reached the point where I don’t worry about whether I’m singing standards or originals, or whether I choose to sing in English or Spanish. It’s the right moment for putting forth what is me. The members of my band and I have found each other in one city – in one painting. We are taking the influences that surround us without worrying about being as pure as possible. We are learning, then teaching.”