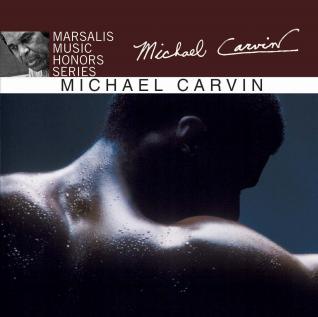 Even when he has not been in the spotlight, drummer Michael Carvin’s presence has been felt over a wide range of music. There are the jazz gigs he has logged over the last 30 years, in support of numerous major artists as well as at the helm of his own groups; and there are the many blues and pop performances he has energized, beginning with two years as house drummer for Motown Records in the late 1960s. Even when he’s not directly involved, Carvin’s influence can be felt through the number of talented drummers who have availed themselves of his insights in the 32 years since he established the Michael Carvin School of Drumming.

Carvin would no doubt be a household name in jazz circles today were he not so single-minded in presenting his music without compromise. As a result, his recordings have been few and far between, and Carvin has continued to fly under many listeners’ radar. That should change when Marsalis Music Honors Michael Carvin is released on March 14, 2006.

Drumming has been at the center of Carvin’s life from virtually the moment he was born in Houston, Texas in 1944. His father Henry “Hank” Carvin, one of Houston’s top drummers, began schooling his son in drum techniques when Michael was six. By the age of 12, the younger Carvin had played his first professional gig and won the first of five consecutive Texas state championships in drum rudimentals. His career as a touring musician began when he hit the road with Earl Grant in 1964, then was interrupted by his two-year tour of duty with the US Army in Vietnam. After receiving his Honorable Discharge, Carvin settled in Los Angeles, where he served in the Motown studios and on bandstands in support of BB King, Hugh Masekela and others; but the urge to play jazz after working with Bobby Hutcherson and Freddie Hubbard led him to New York in 1973. The move coincided with his first major jazz recordings (with Jackie McLean, including the innovative duo performance Antiquity), and was followed by associations with the likes of Pharoah Sanders, Betty Carter and Dizzy Gillespie.

The Michael Carvin School of Drumming was also founded in 1973, and has given Carvin the opportunity to shape the conceptions of some of the most important younger drummers from all over the world. Now in its 33rd year of operations, the school has a list of distinguished alumni that includes Billy Martin (of Medeski Martin and Wood), Michael Shrieve (of Santana), Ralph Peterson, Jr., Eric McPherson, Nasheet Waits, Allison Miller and Rodney Green among many others. Carvin has also shared his knowledge through ongoing relationships with the New School, the University of Hartford and the University of Kansas/Kansas City.

While Carvin’s dual life as performer and coach (the term he prefers to teacher) has led him to place less emphasis on recordings, he was eager to accept Branford Marsalis’ invitation to become one of the first artists featured in Marsalis Music’s new Honors Series. “I’ve known Branford since he was 19, and I trust him completely,” Carvin says of his producer. “Branford is always looking for cats a little outside the box, and I’m totally outside the box, so he knows what I want.”

Carvin endorses the underlying concept of the Honors Series, which is to bring veterans together with emerging players, and eagerly accepted Marsalis’ suggestion of two talented younger players for the session. Marcus Strickland, the date’s tenor saxophonist, has been drawing raves lately with the bands of Roy Haynes, Dave Douglas and others. “I taught Marcus’ identical twin, [drummer] E.J. Strickland, and Marcus used to come by and hang out when E.J. had a lesson,” Carvin notes. “I had also heard Marcus recently with Roy Haynes, so even though we hadn’t played together I knew that his heart was right.” The bassist is Dezron Douglas, a student in Jackie McLean’s program at Hartt College whom Marsalis met in Connecticut. “Dezron was making his first recording, and was ready to give up for a minute because he wanted everything to be perfect. That’s when Branford told him `Then you’d better shoot yourself right now.’ Branford and I are like twins that way – if I don’t eat you up, he will. In the end, Dezron did a great job.” The quartet is completed by Carlton Holmes, who has been Carvin’s pianist of choice since 1990. “I told Branford that I’m like a singer, in that I have to have my piano player,” Carvin explains. “Carlton and I play like one person. He uses space, which makes room for my fast left hand, but he also has something to say. Since I’m from Texas, I also like the idea that Carlton is from New Mexico. I even love the way he walks, because it tells you that, whatever the situation, it’s cool.”

The program features standards and jazz classics, with an emphasis on the strong rhythmic character imparted by Carvin’s arrangements. “I stopped writing a couple of years ago, because the young kids need to learn the standards,” he explains. “When I was coming up, you had to know ‘In Walked Bud’ and ‘Hello, Young Lovers’ and the other things we’re playing here. And, when all is said and done, the basic question is whether or not the music makes you pat your foot. People will learn the melody if you put a beat on a piece of music. If you don’t have the beat, forget it.”

Among the tracks illustrating Carvin’s point are a burning “I’ll Remember April” (“I had Dezron play the rhythm first to give it motion, so that when I hit the runway the music lifted off”), a take on Charles Lloyd’s “Forest Flower” that places new emphasis on the melody (“It’s like that one puffy white cloud hanging in the blue sky – something beautiful around you that you just can’t grab”), a sexy reading of “The Lamp is Low” that places the Ravel-derived melody in a shuffle groove, and an arrangement of “A Night in Tunisia” that took shape when Carvin was touring Europe with composer Dizzy Gillespie in 1979. (“I told Dizzy that he loved Chano Pozo so much that he had never played `A Night in Tunisia,’ he played `A Night in Cuba,’ and we ended up developing what became this arrangement. When the horn player comes in, it sounds like he’s standing on a mountain in Africa, dreaming of Tunisia.”) The disc is completed by hard-swinging takes on “Hello, Young Lovers” and “In Walked Bud” and the intense balladry of “You Go to My Head” and “Prisoner of Love”/”Body and Soul,” with producer Marsalis joining Strickland for a two-tenor reading on the medley.

Carvin summarizes the recording experience, which took place at the University of North Carolina-Greensboro’s School of Music as “very challenging. Human nature is to try to do what you can’t do. I’ve been playing for a long time, but the situation here made me go into another mode.” The results should also lift Michael Carvin’s public profile into a higher realm, one that more truly reflects the magnitude of his contributions.