Other releases by Bob French 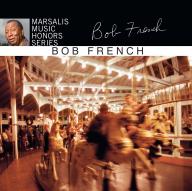 New Orleans has been a primary source of musical creativity for more than a century, and the Tuxedo Band has been at the center of New Orleans music most of the way. “The Tuxedo Band began as an orchestra, either in 1909 or 1910, depending on where you get your information,” notes Bob French, who has had charge of the incredible Tuxedo legacy for the last 30 years. A multi-generational celebration of traditional New Orleans music is French’s focus in a new volume of the Marsalis Music label’s Honors Series. Read more »