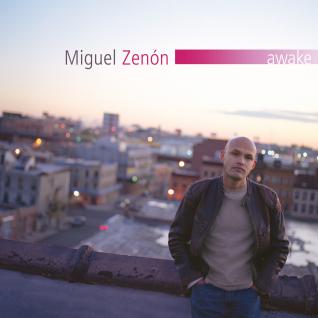 There have been few new voices in the jazz world that have caused as much of a stir and possessed as much individuality as Miguel Zenón. The buzz began with his quartet’s first Marsalis Music release, Ceremonial, a program of original compositions that appeared in 2004. Jíbaro, his second disc, followed a year later, and its bold reinterpretation of the rural music of Puerto Rico helped earn Zenón the overall Best New Artist award in the 2006 JazzTimes poll. Now, the alto saxophonist and his talented crew plus special guests embark on a more personal journey with Awake that is sure to bring even greater accolades.

The ten tracks chart what for Zenón has been a critical inner journey. “I wrote all of the music over the past two or three years,” he explains, “and the individual compositions fell into an order around one of the older tunes, ‘Awakening’. The composition represents a period I went through that in many ways was about personal growth. Trying to find myself as a musician and understanding what it means to have a career in music. What resulted was an awareness of my priorities, and how I want to portray myself as an artist. As central as music has been to my life, I realized that other things are important and carry the same force.”

As is always the case with Zenón, musical rather than programmatic themes are central to his narrative. “Jíbaro had a central theme as well,” he notes, “but here the focus is more personal and philosophical. The compositions are designed to feature the working band. There is also a rhythmic approach that ties most of the compositions together. It involves allowing a phrase to function in different rhythmic zones. The track ‘Penta’ is a good example of these ‘rhythmic dimensions’, and we get into the same feeling on the tracks ‘Camarón,’ and ‘Third Dimension.’”

Another goal was the incorporation of new colors, from the Fender Rhodes that pianist Luis Perdomo employs on four tracks to the use of a string quartet and a three-piece horn section. “I felt that the Rhodes would create a different sonic flow and push the music in different directions,” Zenón says. “And once I visualized that the composition ‘Awakening’ would serve as a connection between the various elements of the record, I decided that the first appearance of the theme would feature my alto backed by a string quartet. Then I decided to also add the strings to the quartet for ‘Lamamilla,’ which is my nickname for my wife, Elga. I’d never written for strings before, and it was a big challenge to employ them as a new color and make something musical without over-writing.”

Zenón also presents his “Awakening” theme as an unaccompanied alto saxophone solo at the close, and as a midpoint explosion with three additional horns. “This was another, more intense version of the theme,” he explains. I wanted to create a feeling of a large group of instruments coming at you all at once with different ideas. Trumpeter Michael Rodriguez, trombonist Ben Gerstein and tenor saxophonist Tony Malaby are good friends and incredible improvisers, and are all very good in this freer, looser approach.”

The members of Zenón’s working band (Luis Perdomo, piano; Hans Glawischnig, bass; Henry Cole, drums) also display the kind of empathy that has made them a true ensemble. “They were key for me in terms of getting the orchestration right on each piece,” the saxophonist stresses. “When we began working on ‘The Missing Piece,’ for instance, Hans used the bow for the unison passage and it didn’t really work. When he shifted to plucked bass, we found that the tempo had to be adjusted. The same kind of approach shaped the other pieces as well.” It helped tremendously that the four musicians have worked together for so long, including newest face Henry Cole, who has now been playing with the quartet for three years. “Henry is from Puerto Rico as well, and has been totally committed to music ever since I met him. He really brought great things into the chemistry of the band,” his leader notes.

Smooth preparation and production were the crucial final elements. “We did a New York gig a couple of days before the recording where we played all of the music in the album sequence and, more importantly, at the approximate length each piece would be on the album,” Zenón says. “You want to know that you can create shorter versions than those you play on the road, where the music tends to stretch out. Working with [producer] Branford Marsalis and [engineer] Rob Hunter is always a very pleasant experience because, while they’re hands-off at the outset in terms of the process, they add two sets of very good ears and work very hard to make sure the music sounds as good as it possibly can.”

All of these forces have come together to create the strongest statement to date from Zenón, who has also been turning heads of late through his affiliations with the SFJAZZ Collective, Guillermo Klein Y Los Gauchos and Charlie Haden’s Liberation Music Orchestra. “I’m getting my ideas out and communicating them to the band more easily,” he reflects. “I’m more relaxed when I write, and I feel I’m growing as both a composer and a communicator of ideas.”

Awake captures all of that growth, as well as the passion, intellect and spirit that has become a Miguel Zenón trademark.