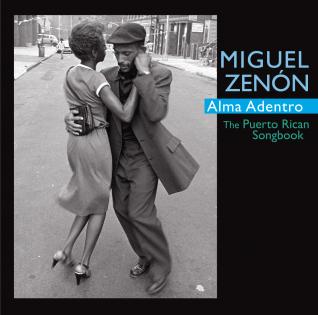 The album is comprised of ten pieces, two each by Bobby Capó, Tite Curet Alonso, Pedro Flores, Rafael Hernández, and Sylvia Rexach, who Zenón refers to as “the George Gershwins, Cole Porters and Jerome Kerns of Puerto Rican song,” and it features his regular quartet augmented by a 10-piece wind ensemble. The music was arranged by Zenón and orchestrated by Argentine pianist, composer and arranger Guillermo Klein.

“This project grew out of my interest in exploring the history and development of The Puerto Rican song,” says Zenón. “I started little by little, researching the material and arranging some of these songs for the quartet, then eventually incorporating them into our regular repertoire. As things progressed, I started focusing on the similar characteristics between The Puerto Rican Songbook and The Great American Songbook, not only musically, but also in terms of cultural impact. From there on, the project started to take shape.”

For Alma Adentro, Zenón kept a consistent idea through the arranging process: he selected two songs by each of the composers, arranging one of the songs in “a more conservative way, staying closer to the original” and the other “with a more modern approach, taking more chances with structure and reharmonization.”

Zenón has explored his musical heritage previously in albums such as Jibaro (2005), in which he revisited the country music of Puerto Rico, and last year’s Esta Plena, in which he reinterpreted the traditional plena style.

But in Alma Adentro the subject is popular song – and it transcends regionalisms.

In fact, many of these pieces have long since become part of the Great Latin American Songbook, to the point that “many people are not even aware that the composers are Puerto Rican,” he notes. “Many of these songs are universal now.”

Still, for Zenón, the connection to these songs is deeply personal.

“These are songs I know well because either my parents listened to them or they were very popular when I was a kid, so I grew up listening to them,” he says and, he notes, he’s not alone. “We have been playing some of these songs with the quartet for awhile, and after every concert we have people who come to tell us ‘You know, my mom used to listen to that song on the radio…’ or  ‘I used to hear that song when I was younger…’.”

As for the wind ensemble, it’s not only an esthetic choice, but also a tip of the hat to the classic singer-and-orchestra sound. But on Alma Adentro, the ensemble doesn’t only provide a lush backdrop for the soloists, it is integrated as an equal contributor to the overall sound of the music.

“That was a concept we discussed with Guillermo from the beginning,” says Zenón. “We wanted something interactive between the quartet and the ensemble – leaving space for interpretation and improvisation.”

To better set up the interaction, the wind ensemble and the core quartet – Luis Perdomo, piano; Hans Glawischnig, bass; and Henry Cole, drums – were recorded in the same room, live.

For Klein, this was crucial for achieving the sound Zenón had in mind.“I know that these days you can overdub everything fifty times, but I couldn’t imagine this project if we were not going to play it live,” he says. “There is a certain energy that is generated when you play it live in the studio, and there is a certain tension, and all the musicians feel invested in the music.”

For Zenón, each piece has a personal association, evokes a personal story. And, while this is an instrumental recording, the lyrics are ever present throughout, be it by helping to shape the interpretation or the soloing, or setting the framework for the arrangements.

“I have a strong connection with ‘Incomprendido’,” says Zenón of the song by Bobby Capó (1922-1989). “It was made famous by [singer] Ismael Rivera, one of my idols, and it was a favorite of my dad’s.” Rivera’s version is in salsa style, while Zenón’s is darker and played as a ballad. In a tribute to the great singer, the canon played by the wind ensemble in Klein’s orchestration echoes the opening horn riff in Rivera’s version.

“Very often when I play this type of material I’m thinking about the lyrics to the song,” he says. “In this case these are songs I know well so it’s actually difficult for me not to think about the lyrics. But eventually, you internalize the words and make it more your own, then it becomes something much more personal.”

“Juguete,” the other Capó piece in this set, was made famous by singer Cheo Feliciano as a ballad, but here Zenón remakes it at a driving up-tempo. The lyrics are a declaration of love in spite of the singer having been turned into a juguete, a plaything. But rather than a lament, that declaration here has a sense of urgency and bite.

“Silencio,” by Rafael Hernández (1892-1965), was originally written as a delicate bolero (“Silence/ the nards and the white lilies are sleeping/ And I don’t want them to know my sorrows”), but while Zenón´s singing-like interpretation is deeply lyrical, the lively arrangement hints at several folkloric rhythms.

“Temes” and “Tiemblas” are by Catalino “Tite” Curet Alonso (1926-2003) and show a tender, lyrical side of a songwriter perhaps best known for his social and politically charged songs.

“I knew these songs and didn’t even realize that they were Tite’s,” confides Zenón. “And as it turns out, both have a similar subject: a secret love that now the woman wants to hide and is afraid will become known,” he says. “And as you get deeper into the lyrics, you begin to put two and two together and realize how personal some of these songs are.”

Here, “Temes” gets a beautifully paced treatment that begins with a stark lament by the alto and the bass before the whole ensemble delicately joins in. “Tiemblas” is carefully constructed in layers of textures and tempos, the rhythm section’s agitation hinting at hidden, perhaps dangerous, undercurrents below the placid surface suggested by the main theme.

Having a melody “that maintains the lyrical essence of the original song while there are much more aggressive rhythmic ideas going on behind it,” is a designthat reappears throughout the recording in several tracks.

It reappears in “Perdón,” by Pedro Flores (1894-1979).  In the original song, the lover asks for forgiveness for some unspecified wrong, but in Zenón’s sunnier, more energetic version, he shades the meaning of the unsung words in unexpected ways.

“Amor,” the other composition by Flores featured in Alma Adentro, is a simple, straightforward celebration of love for one person and for love itself, and here it gets a brisk, sunny treatment.

Meanwhile, “Olas y Arenas” and the title track are by Sylvia Rexach (1922-1961), “a favorite of my mom,” says Zenón. “She’s a real fan of hers.” And with good reason. Rexach had “something very special,” he says. “Sylvia was a natural songwriter. She didn’t really work in the more traditional song structures of a Pedro Flores or a Rafael Hernández who drew from American song, tango, or even opera. She was a true original in every sense of the word.”

“Olas y Arenas” is perhaps the most complex piece in this recording, as the arrangement, taking its cues from the text, features overlapping time signatures suggesting waves, which come and go under the melody.

“Alma Adentro,” the title track, is a heartbreaking melody written by Rexach after the loss of her brother in a car accident. “This is the song we’ve been playing the longest with the quartet,” says Zenón. “And knowing the story behind the lyrics, we wanted to create a certain vibe, creating waves of sound, a sort of quiet storm within the ensemble.”

Remaking popular songs is part of the stock in trade of a jazz musician, but Alma Adentro was a profoundly different experience for Zenón. “This was not just about melodies and harmonies,” he says. “There was a deeper, more emotional connection here. I grew up with these songs and they all had a very special and lasting effect on me.”