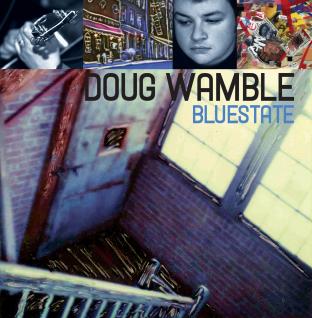 The two years that separate Bluestate, the new Marsalis Music album by Doug Wamble, from his debut disc Country Libations have been a period of intense work and impressive growth. The guitarist/vocalist/composer and his rhythm section of pianist Roy Dunlap, bassist Jeff Hanley and drummer Peter Miles have been touring extensively, writing new material, and honing what has been recognized as one of the most unique and compelling new sounds in the jazz world.

“The guys in the band have our long history together plus our individual histories,” Wamble says of the musicians he has been playing with since their college days over a decade ago. “We’ve done the vocational jazz gigs, and can play the music of masters like Ornette, Monk and Trane; and we had also played in a variety of other situations. After the first album, though, we finally had a chance to go out for a long period of time and see what we could achieve.” What they found was a more complete merging of the disparate influences that make Tennessee native Wamble such an original artist.

“It really started coming together during the winter of 2004, when we just got in a van and drove around the Midwest in the snow. Playing night after night, developing the music for Bluestate, really defined what we were. The experience focused us more in a jazz direction, but, in an odd way, it brought out the other eclectic stuff as well, all of the blues and gospel stuff. The road allowed the disparate elements to come together in a more cohesive way. We’ve melded my wild influences into something coherent.”

The point is driven home by the six Wamble compositions that form the core of the new disc, produced once again by label head Branford Marsalis. Two of them, the exotic “Antoine’s Pillow Rock” and “The Homewrecker Hump,” are older tunes inspired by back stories that Wamble prefers not to repeat in order to protect the guilty. “`Homewrecker’ is probably the oldest tune, from ‘97 or ‘98,” he explains. “The back-of-my-mind inspiration was Bob Hurst’s ‘Stretto from the Ghetto’ [recorded by bassist Hurst on Branford’s Columbia album I Heard You Twice the First Time], but the melody also comes from Bartok. ‘Antoine,’ which was written around the same time, is for a bass-player friend, Anthony Perez, who was really into Natalie Merchant and would listen to her while sitting on a pillow and rocking back and forth.”

“The Bear and the Toad,” is a more recent composition originally written for a guitar/bass duo gig. “It’s like a fiddle tune that I tried with the quartet after Roy saw it in my book of tunes. I had no idea how to play it with the band at first, but all of the guys loved it, and Pete found a groove to put on it. It’s a great example of how we’ve learned to keep our band sound while playing something totally outside our realm.”

The remaining Wamble originals, written specifically for Bluestate, touch on more personal feelings, especially the wryly haunting “Gone Away.” “Musically, it’s a form that alludes to the blues and gospel,” he explains, “and the lyrics add an unusual take on having what you want and being slightly uncomfortable with it. A lot of musicians I’ve known, including myself, define themselves by their constant state of trauma. When things start working out it can be unsettling.”

“If I Live to See the Day” and “No More Shrubs in Casablanca” were both written in response to the war in Iraq, though they make their point in distinct ways. “I was in Hamburg with my wife [opera singer Janna Baty] when the war started,” Wamble says of the former. “I wrote that tune really fast, and it’s a true reflection of my feelings of anger and helplessness, and of being in Europe and seeing America from the outside in. It took the band a long time to get that one together, because the form is long and doesn’t repeat itself. You’ve just got to get it under your skin. ‘No More Shrubs’ was an extension of the same feelings with a more tongue-in-cheek approach. It’s one of those tunes where a melodic idea comes into your head and you think about the different things you could do with it. I could have made it a sentimental ballad, but I like avant-garde music, too, and just decided to go in another direction.”

Dunlap’s original, “One-Ninin’,” finds the quartet on more straight-ahead terrain. “Roy always writes hard tunes, with strange meter shifts and stuff, and the first time I heard the guys playing ‘One-Ninin’ on a sound check I thought it could be a Monk tune. I wasn’t sure at first that we would record it, but after we ran it down a couple of times Branford and I realized that it had to be on the album. It’s in D natural, my favorite key; it’s a 32-bar form, and it swings.”

Bluestate is completed by three covers that underscore Wamble’s gift for bringing music that he finds inspiring into his own orbit. “Peter Gabriel’s ‘Washing of the Water’ goes back 12 or 13 years, when I went to Jacksonville, Florida for school and first met Roy Dunlap and Pete Miles. Pete, who is the world’s hugest Peter Gabriel fan, played ‘Washing of the Water’ in the car for me one night, and it slayed me. It stayed in the back of my mind as something I always wanted to play, and a couple of years ago I tried it out as an out-of-tempo ballad, in the way Keith Jarrett used to play ballads with Dewey Redman, Charlie Haden and Paul Motian. I wrote an interlude and added an element of gospel music, and over time we got to the point where the melody defined the tempo. We’re getting to the point on tunes like this where the music is less compartmentalized, more a big melted swirl of our influences and less a chopped salad.”

Stevie Wonder’s “Have a Talk with God” and the gospel classic “Rockin’ Jerusalem” tap most directly into the spirit that informs all of Wamble’s music and are among the album’s most infectious performances. “There’s nothing complicated about those two,” Wamble laughs, “although I did add the element of going into a minor blues on `Rockin’ Jerusalem.’ Branford teases me that my take on that tune is contrary to the Southern Baptist Convention version. And, for a skinny white boy from Wisconsin, Roy can sure play that stuff great.”

As for the album title, Wamble notes that Bluestate is “a little oblique, and it can be interpreted more than one way. But I’m not afraid to express what I believe in, and when I see problems I want to fix them. It was great to see so many people involved in politics this year, and I plan to stay involved, win or lose. I’m a Tennessee Titans fan, and they were losing nearly every week this year, but I’m still a fan. And that’s the way I am with politics.”

Wamble also looks to sports analogies to describe the progress that Bluestate represents in his musical growth. “You can bring great athletes together who never discuss their game plan but are all good at what they do, and they’ll still pull off some victories, but they won’t necessarily win it all. As a bandleader, I’m like a coach, with the responsibility of turning the individuals into winners. To get on the fast track to growth, you have to prod a band in the right direction. And to give direction, you have to be unimpeachable in what you’re doing.” On Bluestate, Doug Wamble and his quartet are moving forward in the express lane.

Other Releases by Doug Wamble 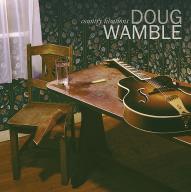 Say it as if it were spelled “womble,” and you’ve got the correct the pronunciation of Doug Wamble’s last name. Catch the echoes of such diverse giants as Louis Armstrong, Hank Williams, Robert Johnson and Ornette Coleman in Wamble’s music, and you begin to sense the uncommonly broad pool of inspiration from which the 30-year-old guitarist, vocalist and composer draws. Read more »