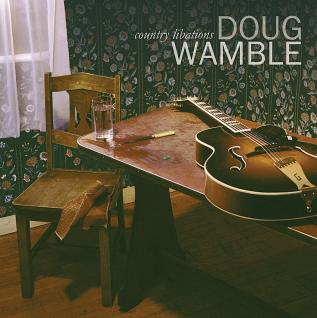 Say it as if it were spelled “womble,” and you’ve got the correct the pronunciation of Doug Wamble’s last name. Catch the echoes of such diverse giants as Louis Armstrong, Hank Williams, Robert Johnson and Ornette Coleman in Wamble’s music, and you begin to sense the uncommonly broad pool of inspiration from which the 30-year-old guitarist, vocalist and composer draws.

Then take in the full force of Country Libations, his debut disc on Marsalis Music, and marvel at the conceptual integrity and singular personality that Wamble has achieved. The Tennessee native offers a music that is true to his roots in blues and gospel, his love of jazz and popular song, and his commitment to both reflect his diverse sources and turn them in new directions. A thoroughly modern musician with a sense of history, a country boy at home in the city, and a cutting-edge leader of his quintet, Wamble is nothing if not an original.

“I never had a real aspiration toward being a professional musician when I was growing up,” says Wamble, who was born in Clarksville, Tennessee and raised in Memphis. Yet he was quickly caught up in the love of music reflected in the playing and singing of his parents and his grandfather at home. An “organic” guitarist at first who learned chords from his elders, Wamble began his musical studies in high school, where he played clarinet and considered a future in symphonic settings. His ambition was altered one Sunday afternoon. “I’d go to the library every Sunday, between the morning and evening church services, to check out records,” he explains, “and as a clarinet player I checked out Benny Goodman. Fortunately, it was a record with Charlie Christian on it. That’s when music really grabbed me.”

Wamble felt that pursuing a degree as a recording engineer would be a wise move (“so my family wouldn’t flip out about me becoming a professional musician”), and he began his journey under a full academic scholarship at Memphis State University. “But three months into my freshman year, my mom took me to see Harry Connick, Jr.’s band with Russell Malone on guitar. Hearing Russell, I decided I had to ditch this `rec tech’ thing, and I changed my major.” Under the tutelage of bassist Scott Reed, Wamble began exploring the options facing contemporary guitarists. “I was determined to be a jazz musician from the purist perspective at first,” Wamble says. “But my teachers wanted me to hear more modern stuff like Pat Metheny and John Scofield, and Sco became my man. He was the guest artist at Memphis State in ’92, and meeting him was like meeting Elvis. Sco was very important to me. His love of Ornette Coleman’s music really got me into Ornette.”

At the urging of Reed, Wamble transferred to the University of North Florida in Jacksonville,
where he hooked up with another important mentor, pianist Kevin Bales. Listening to
countless records with Bales put the young guitarist on the road to his present, expansive conception. “I had that `Wynton [Marsalis] is jive, he plays old stuff’ attitude when I got to Florida,” Wamble says by way of example. “Kevin showed me how Wynton was using formal ideas like Ellington did, but in a modern rhythmic context. It was a revelation, and it came when I was having an identity crisis about my own music in terms of getting my own sound and playing my own truth. Listening to Wynton and people like Jelly Roll Morton, hearing things in common without putting my finger on them, I started hearing connections everywhere. Suddenly Trane and Miles were connected to Louis Armstrong and Johnny Hodges. That’s when I realized that using effects pedals and other guitar effects was not really me, and began the quest to get my own pure sound. My original goal was to work with Wynton, even though everyone said `Wynton hates guitar.’ When Cassandra Wilson came to North Florida in ’93, I introduced myself, we played some duets, and then playing with Wynton and Cassandra became my goals. I just decided to see where working toward my goals would take me.”

The first order of business was finding a way to place acoustic guitar in contemporary settings. “I‘d go on gigs without an amp, and everybody would give me looks; but I just threw myself into playing jazz.” What ultimately resulted is the all-acoustic sound of Country Libations. “My main guitar is a Gretsch 1955 Constellation, an acoustic F-hole guitar, and the sound on the record is basically just a microphone on the guitar,” Wamble explains. “My other instrument is a 1929 National Triolian, a metal guitar that I play upright. It belongs to my uncle Stewart, who found it under the bed when his father passed away. He made me the `personal custodian’ a couple of years ago. I use it in on `Libation #7: Along the Way.’”

Wamble’s years at North Florida also provided insights into songwriting and singing, which he had enjoyed from his earliest playing days but never really pursued. “You spend a lot of time in your car in Florida, going to gigs, and one of my teachers, Jack Petersen, was encouraging me to explore all of the songwriters and learn their tunes. So I got all of the Sinatra, Ella and Billie Holiday albums I could find, and learned tunes in the car driving to gigs. I also learned their inflections, note for note. When I had to sing a solo in class, I scatted a Bird solo and everyone said, `Man, he can sing.’” Wamble’s vocal skills also helped him pay the bills during his time as a graduate student at Northwestern University. “In Chicago, at a wedding, I was asked to sing some Sinatra tunes, and that got me a lot of gigs.”

Yet Wamble’s focus remained exclusively on the guitar after he received his Masters from Northwestern in 1997 and moved to New York. “I came to New York to hook up with
Wynton, be on the scene, and shed on guitar. It wasn’t about being a singer.” He quickly called the trumpet-playing Marsalis, who invited Wamble to a rehearsal of the Lincoln Center Jazz Orchestra, where old friend and North Florida grad Marcus Printup mentioned that singer Madeleine Peyroux needed a guitarist for a tour. Cassandra Wilson also called,recruiting Wamble to record on her Miles Davis tribute disc Traveling Miles, and trumpeter
Steven Bernstein brought Wamble into his Millennial Territory Orchestra. Doug Wamble,
guitarist, had quickly become part of the New York jazz scene.

It was only a matter of time before Doug Wamble, vocalist, also emerged. “Madeleine had me sing on the encore one night, and I got a huge response,” he says. “People like Sarah McLachlan, who we were opening for, told me that I sounded great. Then I was at Wynton’s house one day, talking about Robert Johnson, and I started singing `Come On in My Kitchen.’ When I said I’m not really a singer, Wynton said that maybe I ought to be. Still, I resisted at first, because I knew that players who sing often don’t get taken seriously as players.

“Later, though, I was doing a concert of reefer songs with Steven Bernstein and told him I knew `Viper Drag’ and started singing it. Again, people commented that they thought I sang really well, and someone offered me a gig. I had an instrumental quartet at the time that was really influenced by Branford Marsalis’ group, and I liked Steven’s idea of having several bands. So I put a new quartet together with Charlie Burnham from Steven’s band on violin, plus bass and drums. The first gig was heavily improvised, but the stuff that we played ultimately turned into tunes like `Libation #1: Back of the Hymnal’ and `Libation #5: Ranura Del Campo.’”

Some fine-tuning of the instrumentation and three talented friends from Wamble’s college days helped create the astonishing quintet that is heard on Country Libations. “When I got to North Florida in ’92, the first people I hit it off with were [pianist] Roy Dunlap and [drummer] Peter Miles. [Bassist] Jeff Hanley is a couple of years younger and another fantastic musician who studied there. After I moved North, I still returned to Jacksonville once a year to play gigs, and I would always get those three guys. The love and openness we share really became clear to me. And Charlie, who I’d been working with in Steven’s band, also has a vibe I love. He comes from a different place, and I knew his voice on violin would be another great perspective. As a band, we’ve definitely grown into something different, more precise, with more intricacy and detail.”

The band’s debut features nine stunning Wamble originals that reflect his personal odyssey. “Writing the music was an organic process,” he notes. “Delta blues, gospel and Ornette Coleman are the three major sources I see this music drawing from, and those sources came out without my trying.” For variety, Wamble includes a cover of Sting’s “Walking on the Moon,” with a guest appearance by producer Branford Marsalis on soprano sax, and “Baby If You’re Lying,” which Wamble’s mother wrote for a songwriting competition 20 years ago. The inclusion of this last track speaks to the awareness of heritage that echoes in all of Wamble’s music.

“For me, it’s been important to always stay connected with where I come from. I’m the weirdo in the family; but everybody always gave me great love and support. The other side of me is that now I’m a New Yorker who loves being a part of the city. It’s really been about negotiating those two things - taking what New York has to offer, putting myself among all of these great musicians, but always remembering where I’m from and who I am.

“Ignorance is a bliss that I want no part of,” he concludes. “I want to know and be able to
play everything in music. I don’t put limitations on myself. I’m one of these people who like
to have a band, and I want to develop a band sound. I put as much seriousness into playing
[Duke Ellington’s] “East St. Louis Toodle-O” as [John Coltrane’s]“Crescent,” and I want to approach my own music in that way. I want to do what Ellington did – to play all of the music of the world through my own sensibility.”

That sensibility, heard in all its splendor on Country Libations, promises to be among the most important new sounds of 2003.

Other Releases by Doug Wamble 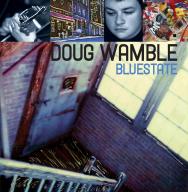 The two years that separate Bluestate, the new Marsalis Music album by Doug Wamble, from his debut disc Country Libations have been a period of intense work and impressive growth. The guitarist/vocalist/composer and his rhythm section of pianist Roy Dunlap, bassist Jeff Hanley and drummer Peter Miles have been touring extensively, writing new material, and honing what has been recognized as one of the most unique and compelling new sounds in the jazz world. Read more »