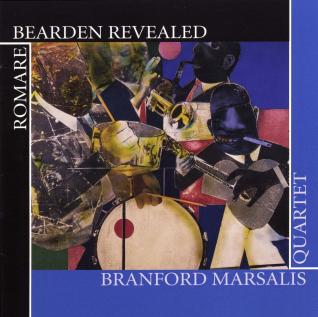 Jazz musicians have frequently inspired and been inspired by visual artists; but the interchange has never been more direct and intense than on Romare Bearden Revealed. This disc, comprised entirely of newly recorded music, was produced by saxophonist Branford Marsalis in celebration of “The Art of Romare Bearden,” a major retrospective that opened at the National Gallery of Art in Washington, D.C. in 2003. Today, we are pleased to have the opportunity to work with museums who continue to highlight this very important artist by offering new and different perspectives on his work, increasing his profile further.  Please visit our list of “Current Bearden Exhibitions” for details.

The affinity that Romare Bearden (1911-1988), one of the most vibrant and visionary American painters of the 20th century, felt for jazz music has been well documented. A native of North Carolina whose family relocated to Harlem when he was three years old, Bearden was a true child of the Harlem Renaissance whose circle of friends included many of the community’s leading musicians and authors as well as painters. Frequent visits to relatives who remained in the South also sustained Bearden’s fascination with the rural as well as the urban strains in African-American culture. By the 1940s, jazz musicians and jazz scenes had begun to appear in his work; and as time passed he began to employ titles of favorite jazz performances for his paintings and collages. In his later years, Bearden created specific works for albums by Charlie Parker, Donald Byrd and Wynton Marsalis; and, since his death, musicians such as Sonny Fortune and Robin Eubanks have also employed images created by Bearden for their recording projects.
Branford Marsalis is among the many jazz artists who have been keenly aware of Bearden’s creations. The charismatic saxophonist met Bearden in the ‘80s and owned two of Bearden’s works. Having recently moved to North Carolina with his family, Branford had also gained new insight into the sources of Bearden’s vision. So when the Romare Bearden Foundation suggested that Branford’s label develop an album to complement the major Bearden retrospective that opens at the National Gallery of Art in September, he embraced the idea wholeheartedly.

What has emerged is a meditation on Bearden’s vision in which Branford, on soprano and tenor saxophones, his quartet (featuring Joey Calderazzo, piano; Eric Revis, bass; Jeff “Tain” Watts, drums) and some illustrious guests present their own aural impressions of Bearden’s powerful visual imagery.

Chairman, Tallal ELBoushi, stated, “The Board of Directors of the Romare Bearden Foundation feel enriched by our association with the immensely talented Branford Marsalis. This project brings together two typically unconnected art forms, visual art and music. Through this creative partnership on the Romare Bearden Revealed CD project, we saw a natural alignment with the Foundation’s mission to preserve and perpetuate Bearden’s legacy. We recognized the opportunity it offered to once again publicly acknowledge Bearden’s truly exceptional and multidimensional talents, among them as a visual artist, writer of scholarly and children’s books and a songwriter/lyricist. It is particularly fitting that this unique project has come to fruition during this time when Bearden is being celebrated and honored with a major retrospective by the National Gallery of Art - the first African-American artist to be so honored.”

After immersing himself in Bearden’s art, Branford created a program that moves among jazz classics referenced in and suggested by Bearden’s art, new compositions created expressly for this recording, and a song in which Bearden himself played a creative role. From the jazz works that share titles with Bearden paintings, Branford chose “Slappin’ Seventh Avenue with the Sole of My Shoe,” a 1938 tour de force by the Duke Ellington orchestra rearranged for quartet plus rhythm guitar; “J Mood,” his brother Wynton’s 1986 blues recreated here in a performance where the trumpeter joins Branford’s quartet (drummer Watts was also heard on the original recording); and “Carolina Shout,” James P. Johnson’s classic stride-piano piece presented as a charging duet between Branford’s soprano sax and the piano of Harry Connick, Jr. The feelings generated by Bearden’s art recalled two other traditional compositions – Jelly Roll Morton’s “Jungle Blues,” heard in a rousing live performance recorded at Philadelphia’s Kimmel Center by the Marsalis Family, and “Steppin’ on the Blues,” in which Branford’s quartet interprets the soulful 1924 recording in which trumpeter Tommy Ladnier was featured with pianist Lovie Austin’s Blue Serenaders) – as well as “Laughin’ and Talkin’ (with Higg),” a recent Watts homage to the late Billy Higgins that finds Branford and Wynton engaging in astonishing instrumental dialogue.

Branford also wrote “B’s Paris Blues,” a nod to both Bearden and saxophone patriarch Sidney Bechet, and asked Marsalis Music recording artist Doug Wamble to bring the sound of the rural blues into the mix with his solo piece “Autumn Lamp.” Both of these new compositions allude to Bearden paintings that will be included in the exhibition. Finally, “Seabreeze,” a piece from the 1950s to which Bearden contributed lyrics, was revived at a sensuous bolero tempo.

Romare Bearden Revealed is a recording that reflects Branford’s view of Bearden as “adventurous. His work reflects a world of tradition, and also the will to break tradition.” Annotator Robert O’Meally adds that the disc “challenges hearers to see the music, viewers to hear the paintings,” and likens the interchange between Bearden’s creations and these musicians as “calling and responding – or, as Bearden liked to put it, calling and recalling.”